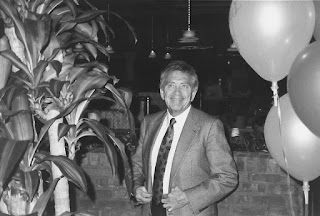 Bill Regas passed away Monday morning at age 92. Affectionately known as Poppy these days, those of us falling under his restaurant tree referred to Bill as The Chairman.

What's the radio connection? In 1953 when WIVK went on the air, the station was on Gay Street across from Regas Restaurant. 1953 was also the year Bill became Regas GM after his Dad's passing.

I'm proud to have worked for both Bobby Denton and Bill Regas, two of Knoxville's true legends.

Bill was past President of the National Restaurant Association and was at the helm of Grady's Goodtimes starting in 1982 along with Grady, Frank Regas, Gus Regas, Mike Connor, Rick Federico and Kevin Thompson.

I like to say my career went from "platters to platters"...records to restaurants! I was an original Goodtimer at Grady's in 1982 and when I exited in 1995 I was responsible for 25 of the 50 restaurants. Like working for Bobby, being associated with Bill was an honor and a life shaping experience.

May his memory be eternal!